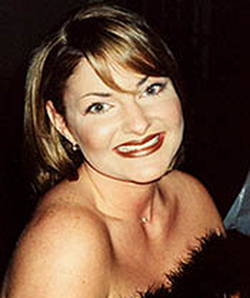 Ann Pace is a petite, fiery woman.  She’s opinionated and the embodiment of what one would imagine a strong southern belle to be.  She’s resilient.  That resilience is apparent in her weary eyes.  They are hollow and filled with a burdensome sorrow.  Her laughter masking, even easing the pain she carries and will take to her grave.

I interviewed Ann Pace at her Jackson home.  It was a last minute interview on a Saturday night.  She had just gotten home from Louisiana.  She was there for a sentencing hearing where she confronted the man found guilty of killing her 22 year old daughter.  A story so horrific, it was heard across the nation.

Charlotte Murray Pace was murdered in her Sharlo Avenue apartment in Baton Rouge on May 31, 2002.  Pace's body was found beaten, raped, stabbed and punctured over 80 times with what investigators say were a flathead screwdriver and knife. She had just graduated from Louisiana State University.

Having read the horrific details of her daughter’s death and knowing that she had just returned from confronting the man she believes killed her ‘Murray’, made it very awkward to ask this bruised woman for an interview.  But, as a journalist, I had no choice but to muster up the nerve to ask regardless of my own personal feelings.  Fortunately for us, she gave the okay.

In less than an hour, my photographer, Ryan and I, pulled up to her gated community.  We couldn’t remember the gate code.  As I called Mrs. Pace, an older gentleman walked up to the news car asking if Mrs. Pace was aware we were outside.   I leaned over and told him she was expecting us.  I raised the cell phone up and asked if he’d like to speak with her to confirm.  He said no and punched in the gate code to let us in.

Mrs. Pace and her eldest daughter Sam were waiting for us at the front door.

After unloading the gear from the truck, Ryan and I went in to the home.  With Christmas only weeks away, the home was ornately decorated.  The smell of fresh pine is thick in the air.  On her formal dining room table sits a small Christmas card as if to be on display.  My attention was taken away from it, when Mrs. Pace offered us refreshments.

Ryan was configuring the living room for lighting.  Mrs. Pace first offered us glasses of diet Pepsi.  We both politely declined.  I turned down the offer because I didn’t want to inconvenience her any more than we already had.

She then offered to make us some ‘quick’ coffee, but her daughter Sam exclaims as though to take her word for it, “It tastes like sewer water”!  Mrs. Pace responded jovially, “I don’t think I would put it that strongly”!  They both laughed.

Before I could get lost in their laughter, I slowly turned my gaze to my left as I stood in the hallway.  Down the end of it, I saw a grayish-brown, very fluffy cat walk into a room.  The first thought that came to mind I said aloud, “Pretty Kitty”!  Before I could say anything else, the laughter quickly turned to an eerie silence.  Their faces pale as though they had seen a ghost.  Shock filled Mrs. Pace and Sam’s faces.  It’s as if time stood still.  I immediately apologized and asked if I had said something wrong?

Mrs. Pace turned to me and said that was the cat’s name.  Murray didn’t want to name it and ‘Pretty Kitty’ is what she came to be called.  “She hated it.  It was in the house when Murray was attacked.  It witnessed Murray struggle to stay alive”.  With grief in her eyes and a quiver in her voice, she continued to tell me the story of ‘Pretty Kitty”.  She went missing the entire day; the day Murray was killed.  She says a neighbor found it, with some of Murray’s blood on its fur and locked it in a garage.

After a brief pause, she proceeds to laugh, “Murray hated that thing”!  Her eyes welling up, she continues, “And would probably want to run it over”!  She went on to say Murray would turn in her grave to know a lot of people donated money to the MSPCA in Pretty Kitty’s name.

Her face was now red.  She laughed so hard it brought tears to her eyes.  I just stood there frozen, not knowing whether to laugh with her or cry.  I felt chills all over my body.  My skin crawled with goose-bumps.  It felt as if Murray were in the room watching and listening.

Ryan broke through the awkwardness by asking Mrs. Pace to sit down at one of the two dining chairs he positioned face to face for the interview.

Upon entering the dining room, I couldn’t help but notice the small Christmas card again.  It was very colorful.  The focus of the card is a Christmas tree, teddy bear, and all things associated with the Christmas holiday.  Come to find out, this holiday card holds a special meaning.  Every year Mrs. Pace says she set it on her dining room table.

It was not only a memorial, but a rare art piece for the whole world to take notice.  I certainly did.  Mrs. Pace said Murray drew the card in the sixth grade while attending Casey Elementary School in Jackson.  She drew it for a Christmas picture contest…and won the competition.

That Christmas card was the transition onto an emotional tour.  It’s one, I’ll never forget.

It’s one Mrs. Pace says she wouldn’t want to relive, especially, the last two and a half years of her life.

The journey began when she recounted some of the family’s interaction with Derrick Todd Lee in court.  “As my daughter very eloquently put it…that his was the last face that Murray ever saw and Sam, Murray's sister said, my face will be there and looking at you when you die".

Pace said Lee’s face was the last face her daughter saw before dying.  That’s why she held up one of Murray’s autopsy photos. “And that picture was a picture of the face that Derrick Lee left her with and it's horrible. I mean, it's horrible and I wanted him to have to look at it again and I wanted his family quite frankly to see his handy work and hope that, that would be important to pressure him to confess to the things he’s done".

Pace made clear this action wasn’t for effect, but to show the pain she is burdened with daily.  She wanted him to tell the court what he knew about the other women he’s accused of raping and killing.

Mrs. Pace also expressed another frustration, “He continues to claim he’s innocent which is absolutely ridiculous because DNA, the DNA evidence in his case is so powerful it’s indisputable”.

I asked if she were ever concerned for her safety or her family’s safety while in court.  She answered, “Yes.  We have been threatened by and through someone affiliated with him [Lee].  He has screamed expletives in court like ‘Fuck you, fuck you’ and had to be dragged out of court”.

With tears filling her eyes, Mrs. Pace says even though Lee faces death by lethal injection, closure is a word without meaning for her and her family.

"You can't close a door in Murray's face. I mean, you can't.  There is no closure. I mean you learn to go on and you do what you must and of course I find a great deal of joy in my daughter Sam and my son John, and good friends and family members, but, it's just missing.  It's just broken. It's just hurt and, it...there's no end to that".

I’d have to say, this was and remains one of the eeriest interviews I’ve ever done.  The connection with Mrs. Pace was absolutely surreal and unnerving.  Overall, I found Ann Pace to be an amazing and courageous woman through all her grief and fight for justice.

Ann Pace of Jackson holds a sign with photos of her daughter, Charlotte Murray Pace, who was murdered at her home in Baton Rouge in 2002, in an area designated for protesters outside Mississippi State Penitentiary at Parchman. (Rick Guy/The Clarion-Ledger)
Myrlie Evers Williams
Nadia Salomon